About the project
In 2012 the Natural England team at Dersingham Bog teamed up initially with the North Norfolk Ringing Group, the British Trust for Ornithology and site volunteers to begin ongoing monitoring of the nests of key heathland breeding species, including Stonechats.

By ringing the birds, the volunteers and reserve team are able to monitor their movements on Dersingham Bog, determine which Stonechats remain on site during the winter or, with your help, whether they disperse along the coast nearby or even further afield. By colour ringing individual birds, the team are able to give a life history of each individual bird and its movements without the need for future recapture.

The colour ringing project was set up to assist Natural England staff in determining whether the management work on the bog was beneficial to the birds,  and in 2018, all the survey work was brought back in-house within Natural England, who are now solely running the project in conjunction with the BTO.

We also monitor and ring Nightjar, Woodlark and Tree Pipit on the reserve and you can read about that aspect of the project in more detail below and on the Results page. However, this website mainly covers the Stonechat aspect of the project as their gregarious behaviour means that they tend to be an easier species to both re-find and read their colour ring combinations.

The numbers of breeding pairs of Stonechats have risen dramatically in recent years on the reserve, resulting in a high number of ringed birds dispersing from the site. This success provides an ideal opportunity to put the spotlight on this iconic and fascinating species in an attempt to both spread awareness of the project and to encourage the reporting of sightings of ringed Stonechats. 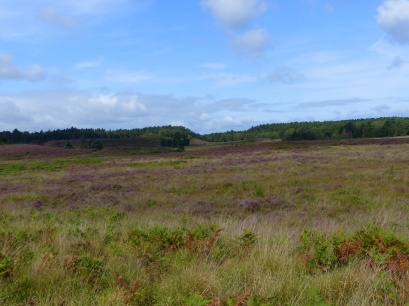 Dersingham Bog contains one of the last remaining fragments of lowland heathland in Eastern England. Since 1960, 85% of the UK’s heathland has been lost, resulting in significant declines in the many species dependent upon it. The reserve holds nationally important numbers of breeding Nightjar, as well as being home to locally scarce breeders such as Woodlark, Stonechat and Tree Pipit.

As part of the restoration and management works at Dersingham Bog, the project has monitored the breeding success and movements of four key species since 2012, with an emphasis on the effects of management works, public access, weather and predators on the success of nesting Stonechat, Woodlark, Nightjar and Tree Pipit and how these may affect the future management of parts of the site. 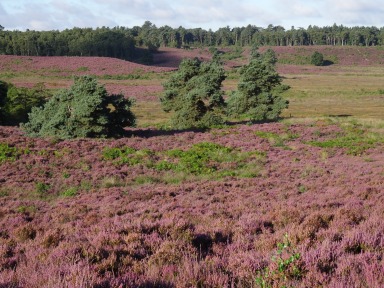 The reserve receives some 15,000 visitors annually, which results in increased pressures from people straying off the path and dogs off the lead. Weather also plays a big part in the fortunes of birds on the site. Another aim of the ringing project is to understand the habits and requirements of nesting birds on site and this will allow us to look at fine-tuning the management of the site to improve breeding success in the future.

Survey Methodology
Each year, a series of surveys for Stonechat, Woodlark, Tree Pipit and Nightjar, as well as a Common Bird Census, are conducted on Dersingham Bog. These pinpoint occupied territories of each species early in the breeding season to enable a more concentrated nest-finding effort by our volunteers and reserve staff, often by many hours of observation to record breeding progress.

Our team members collectively have extensive knowledge of bird ecology and many years of experience in ornithological fieldwork, and the project acknowledges their invaluable contribution.

The aim is to locate Stonechat nests at the incubation stage, which will then be monitored until hatching occurs and the ringing of the nestlings can be planned, typically at around 6 days old.

We gather information on the number of eggs laid, how many hatch, how many young survive to be ringed and eventual fledging success. Under licence, all Stonechat nestlings at Dersingham Bog are ringed with a combination of a plastic colour ring over or below a metal ring on the right leg, with two colour rings on the left leg to allow them to be identified individually.

Since breeding numbers have increased on the site, there have been so many young Stonechat ringed in the last couple of years that we nearly ran ou

t of colour combinations! And during 2016, we changed the order of the rings on the right leg to give us more options.

So, as well as the combination above, some Stonechats from the 2016 broods on the reserve will now sport a metal ring over a grey plastic ring on the right leg, a reverse of the original combination.

By 2017, we’d gone through the various colour combinations again so we  began using dark green over metal, or metal over dark green on the right leg.

During 2018, we have now changed to a new base colour combination, having used up all the dark green options. So we are now using metal over dark blue on the right leg.

Other species surveyed at Dersingham Bog
As well as nest monitoring, the reserve team set up an additional colour ringing project on Dersingham Bog for Woodlark, as well as standard ringing of Nightjar. In 2015 Tree Pipit were added to the list of species studied in more depth. 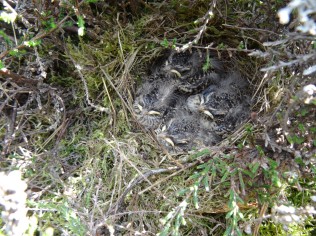 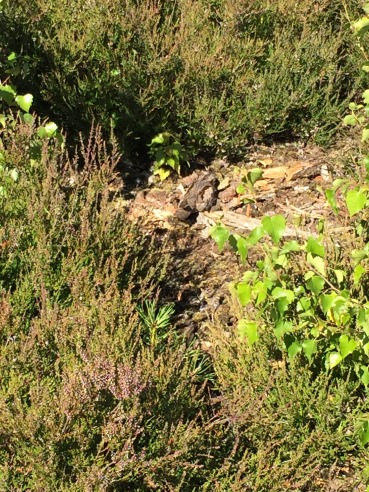 2014 also saw the beginning of a three year joint project with the British Trust for Ornithology and the NNRG looking at the foraging habitats of Nightjar by satellite tracking, which will allow a direct comparison with Thetford Forest to see the difference in the foraging habits across the two very different habitats. 2016 will be the third and final year of the satellite tagging stage of the project and it is hoped a paper will be written on the findings.

What does the future hold?
We believe the project has a bright future, with the aim of learning more about not only Stonechats but Woodlark, Tree Pipits and Nightjars. The hope is to continue the nest monitoring and colour ringing and build up a more comprehensive picture of how birds use the site, and feed this data into national datasets. The ongoing monitoring will also provide survey workers with valuable insights into the fieldwork skills necessary to find the nests of these challenging species.

Also, a detailed analysis of the data will allow us to assess the success of the heathland breeding birds on Dersingham Bog and determine what management provisions we may need to provide to improve nesting success in the future.

If you’d like to become involved in the project, please see the Join Us page. We are particularly keen to hear from survey volunteers who can help our small team.